My sister had been to Italy in high school about 5 years ago, and the one place she was most eager to return was Venice. I’m not sure what I expected, but I was blown away.

On day three of our trip, we took an early morning train from Rome to Venice. It was the longest ride of our trip, at about 3 hours long. That is to say, the high speed trains in Italy are a dream. Quick, comfy and convenient. We had Eurail Italy passes, which I believe means that we could take virtually any high-speed train anywhere in Italy. My dad made reservations in advance, so when we got to the station, we had seats reserved together. Given how many different cities we visited, I think the passes were definitely worth it. I’d certainly get them again for travel in Europe, mostly because I’m obsessed with the high-speed trains. While the train was 3 hours, a drive would be almost 6.

As soon as you exit the train station in Venice, you’re looking at the Grand Canal. It took my breath away.

We  had some confusion about riding the ferry to where our hotel was, but eventually it was sorted. I will say that I love boats, and I love water. Getting to Venice and feeling the breeze off the water and seeing the gorgeous blue canals was more beautiful than I ever imagined.

After we found our way to the Rialto stop on the Water Bus, we encountered a bit more trouble navigating to the hotel. Mostly because between the smaller canals in Venice, the streets are incredibly narrow.

One thing we had that made navigating a bit easier was the WiFi hotspot we rented from Tep Wireless (suggested by Erin!). It works by using the local networks to create a hotspot. It’s definitely only as good as the network around it, so in some areas we had better access than others. I hadn’t used a hotspot when travelling internationally in the past, but in Venice especially, it was helpful to be able to use maps to find our hotel, rather than poking around pretty much blindly.

Maps ultimately got us pretty close to our hotel, but one street over. Luckily, a window watcher heard us rumbling down the street with our luggage, and pointed us in the right direction.

Our hotel, Ca’ del Console, was definitely not as modern as the one in Rome, but I loved a lot about it. First, we had two balconies overlooking a canal. When we were in our room, I was almost always out on the balcony, watching the canal, drinking coffee or prosecco. It was also a much more “Italian” looking place, with a gilded headboard on the bed, dark wood and art on the walls. I’m also certain that it was haunted.

The location was also perfect. We were just a short walk from Piazza San Marco and the Rialto Bridge. I kept saying that Venice was like Disney’s Epcot, until I finally realized that Disney’s Epcot is actually like Venice. It was incredibly charming. I would be content to go back and just wander, sit in Piazzas and drink wine for a week straight. 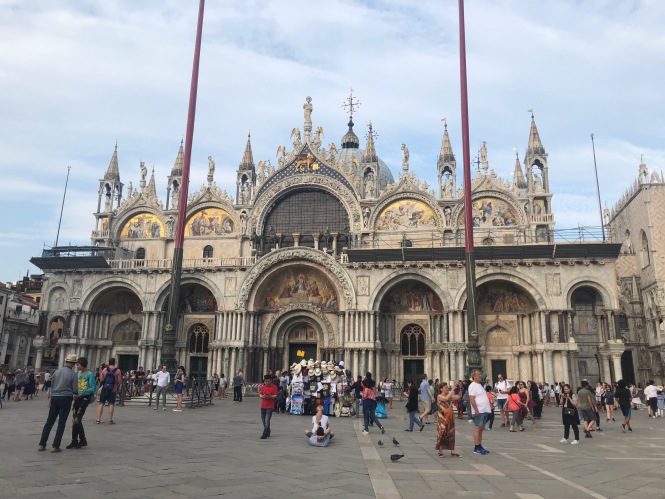 On our first day in Venice, we poked around and made our way to the Piazza San Marco, and the seaside. One thing I wish we had time to do was tour Doges Palace and the Bridge of Sighs. However, we were able to go up in the Bell Tower. We waited no more than 30 minutes in line, and the tickets were 6 euro each. Up top, the views were amazing. Seeing the Piazza, the coastline, and the town from that height was magical. 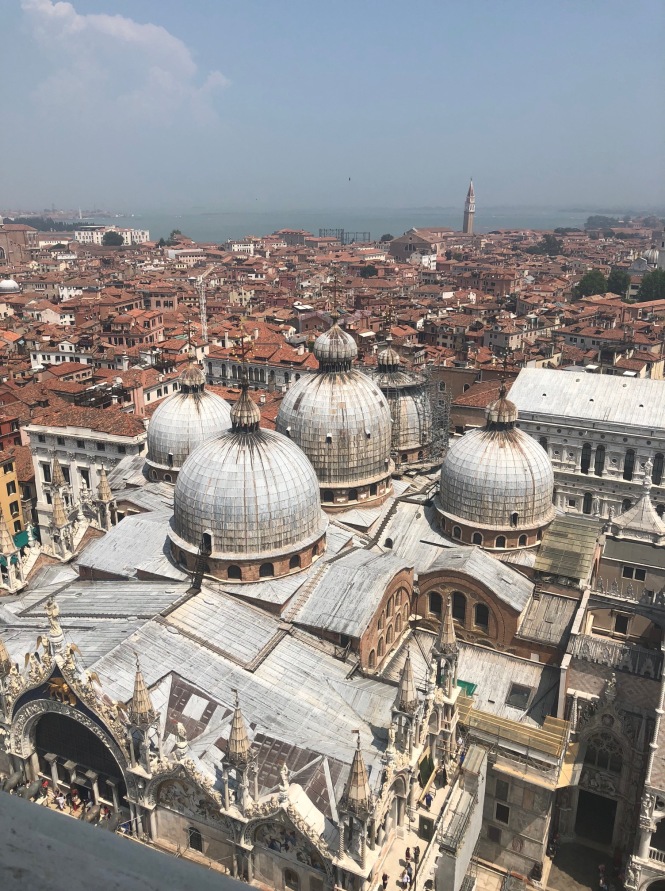 And of course, we took a gondola ride. As I said, I love water and boats, and it was cool to see the city from the water, and not just the bridges. We were lucky that there weren’t any lines, so we hopped on, and took about a 20 minute ride. The gondoliere was perfect, he didn’t talk to us too much, but he pointed out sights along the way, like the house where Marco Polo was born, and my favorite, if only for the name: Tit Bridge (where prostitutes used to hang out back in the day). 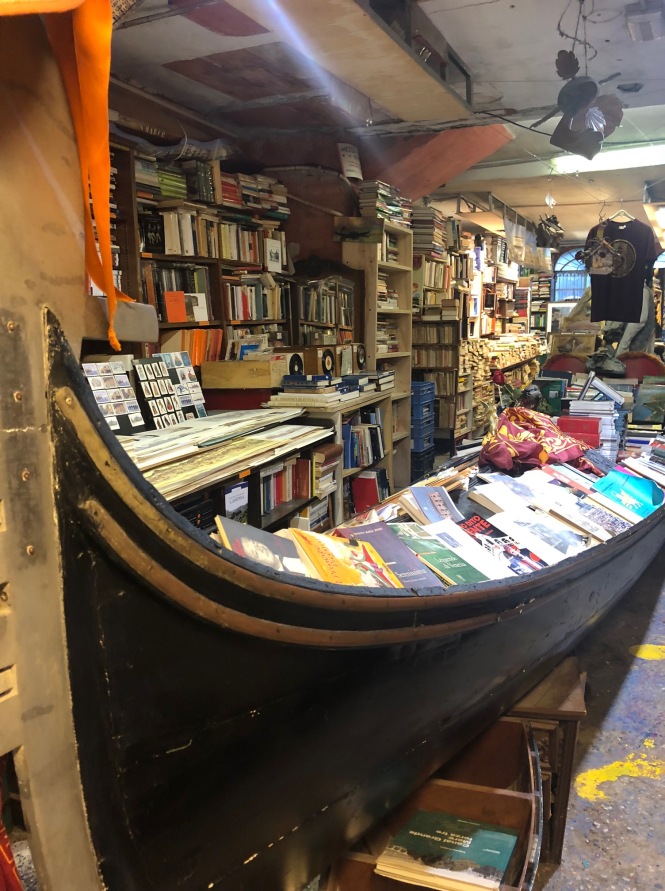 While my parents took a nap and cleaned up for dinner on the second afternoon, Bridget and I went out exploring around our hotel. We found the Libreria Acqua Alta, the bookstore of my dreams. It was an old bookshop, naturally, and was filled top to bottom with books. There was a gondola inside also filled with books. And there were two outside areas — one with a wall and staircase made from books looking out at the canal, and one little seating area looking directly at the water. Bookshops are my happy place, and this one was magical. All the books were in Italian, so I didn’t end up buying anything, but if you love books as much as I do, it’s an amazing place. 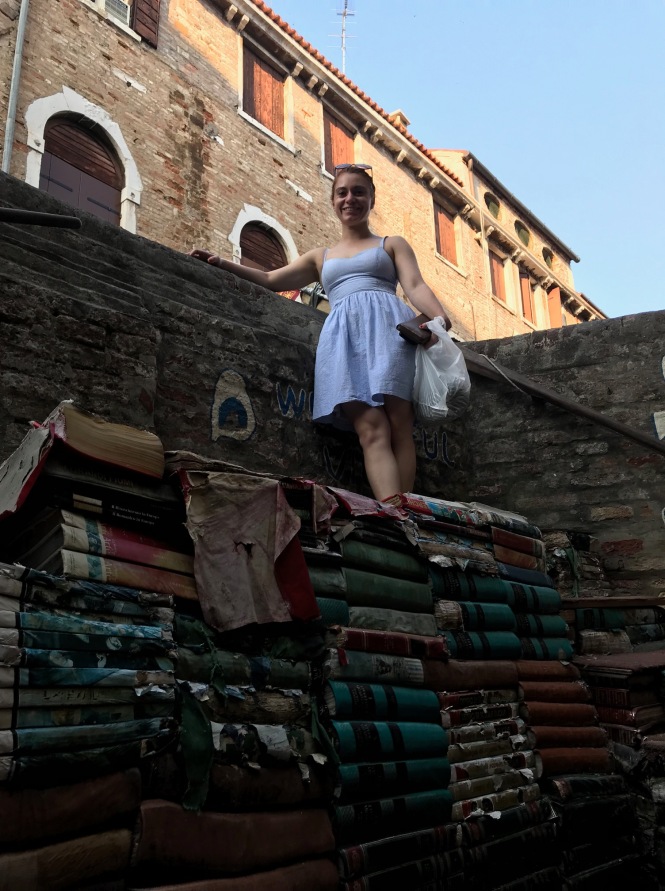 Also, a few days after we left, SNL cast member Aidy Bryant took an almost identical photo to mine. 8-).

Our final night in Venice, we wandered away from San Marco and the Rialto Bridge, and found a quiet piazza for dinner. I wish I remembered the name of the restaurant, or even where it was, but we just wandered around until we felt like eating. The best way to find somewhere, I think. I had an AMAZING salmon, and we had a relaxing evening watching a bunch of kids play in the piazza as the sun set. It was like being in an old Italian movie.

After two nights in Venice, we made our way to Verona, a place I knew almost nothing about, except that it’s where Romeo and Juliet is set, and “Juliet’s balcony” is there.

I’ll come right out and say it, Juliet’s balcony is the worst part. It is small and very smelly (?) with absolutely no crowd control. Also, totally something made up for tourists.

That being said, Verona was a sweet little city. It’s full of Linden trees that were blossoming when we were there, and the whole city had the sweetest floral scent. Definitely a little “hoity-toity,” in the way any “romantic getaway” city might be. It wasn’t my favorite city, but we did have the most amazing meal there.

After visiting the disappointing balcony, we went back to our hotel, Hotel Verona, to regroup. I did some research and found a restaurant that came highly recommended by Rick Steves, called Enoteca Cangrande. We managed to get a seat without a reservation, but I’m not sure how well-advised that is. This was a spot where most of my family says they had their best meal of the trip.

We started out with Rossini, of course. The waiter then brought us parmigiano cheese, which was aged for 36 months. I am not usually a fan of hard cheeses, especially parmesan, unless it’s on my pasta. But oh my god this was so good I could have eaten a pound. I’ve since learned that this is called parmigiano stravecchio. I am taking recommendations on where to buy in New York, please and thanks.

We also had a stellar olive oil here, made by the owner from seven different olives. We brought a bottle home, and I am so looking forward to go back to Rochester just to have a taste.

I was most jealous of my sister’s meal, ravioli with butternut squash and sage, but because it had almonds I couldn’t get it. I had a potato gnocchi with speck and radicchio, which ended up being excellent.

After the pasta, I tried to order tiramisu for dinner, but like many places in Italy, theirs had nuts in it, so I opted for some lemon ice with candied ginger in a pool of grappa. I did not know what grappa was prior to this meal, and when I first got my sorbet, I got a heaping spoon of it and was jarred awake. For those of you who don’t know, grappa is like a limoncello made from grapes, so I essentially had a mouthful of liquor unexpectedly.

My mom had a lemon tart for dessert, that my father claims is the best thing he’s ever eaten. He spent the rest of the trip chasing down a similar pastry.

After dinner, our waiter Mauro, (it’s important to know him, he was amazing) not only recommended a delicious dessert wine, but gave us a crash course in what it takes to make a dessert wine, complete with a diagram (pictured above). As it turns out, the grapes on the outside of the bunches get more sunlight, and are therefore sweeter. 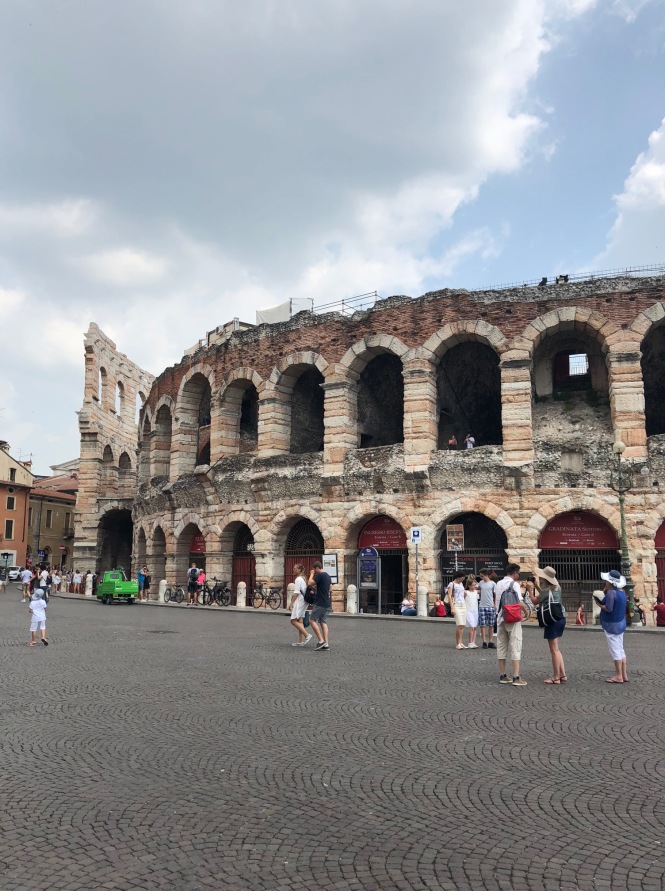 We only spent one night in Verona, which was definitely enough. They have an arena that looks very much like the Colosseum where there are opera performances. I think if I was there for another night I’d definitely see a show there for an authentic taste of Italian opera.