As of today, I’m about 2 months out from running the Chicago Marathon. In a cloud of ill-advised confidence, I entered the lottery last fall, and got picked. And now here I am, less than 24 hours after running 15 miles for the first time in my life, the farthest I’ve ever ran. Unfortunately, it won’t be the last time, and it won’t be the most miles I’ll ever run.

On the bright side, completing a 15 mile run feels amazing. Getting this far into my training, albeit daunting and exhausting, feels amazing. After my first half marathon in 2015, I declared that 13.1 miles was the exact maximum my body could handle. Since then, I’ve ran 5 more half marathons, and watched a few friends conquer the full 26.2 miles.

I looked at my stumpy little legs and thought to myself, I could never do that, right? A half marathon is just as impressive, and far less excruciating. I thought, I’d never do that to myself.

But here we are. Like so many things in my life, like getting a tattoo and travelling as much as I can, I’ve decided that I don’t want to die without trying. So here we are, mid-August, and I’m doing better than I thought I would be.

I’ve written before about why I run and what I enjoy about it, but training for a marathon demands a lot more than “being competitive” and “enjoying the feeling.” Because to be honest, the feeling of anything over 10 miles isn’t great, and it’s myself that I’m competing with. Not only do I challenge myself to run farther nearly every weekend, but I also have to be dedicated, getting long runs in before I meet up with friends on the weekends, waking up early to beat the heat. I have to actually fuel myself properly, and actually rest before and after the runs.

One thing training has helped me with is becoming more mentally tough. Yes, I love to compete and be the best I can, but running for over two hours straight is a tough mentally as it is physically. One book that has been incredibly helpful for this aspect of training is The Non-Runner’s Marathon Trainer. It’s not a very glamorous book, but it helped me train for my first half, and is getting me through the slog now as well. 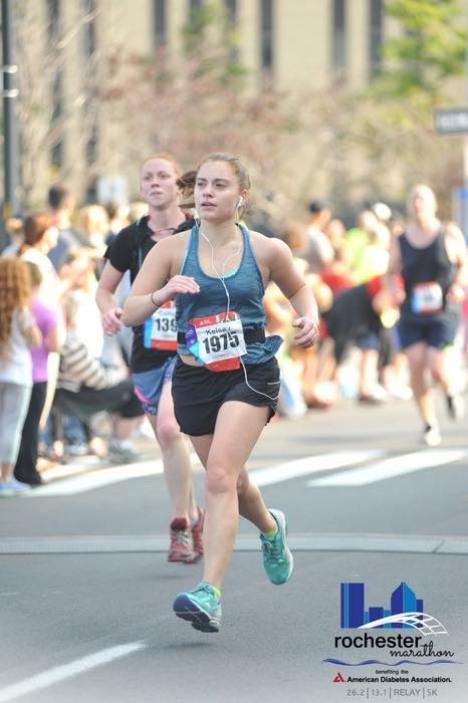 The book includes case studies from a course taught by the authors’, where every one of the class members completes a marathon at the end. The runners include ex-athletes, parents, and people who have never been athletic in their lives. One of the most helpful aspects of the book talks about changing the way you talk to yourself when you run, and about running. The authors encourage you to refer to yourself as a marathoner early on. Being in that mindset, as dumb as it sounds, truly helps. When I need to get myself through a rough stretch of a run, I repeat a mantra in my head, something like “I am a marathon runner. I am good at this and I love it. I am strong. I can do it.” Just saying the words over and over helps.

It also helps when I need to slow down or walk. Walking still keeps me going, and it doesn’t particularly matter to me what speed I’m running, so long as I’m doing it.

What’s more, this mindset of boosting myself up while dismissing negative thoughts has brought healthier thought patterns to other aspects of my life. If something doesn’t go my way at work, I psych myself up with the right self talk: “I am a publicist, I’m great at what I do and I know what I’m doing. If I pitched this book to the best of my ability and this outlet doesn’t want to cover it, it doesn’t matter.” It helps me put it into perspective that my effort and competence isn’t totally subject to things outside my control.

Another way I keep myself sane during long runs is by listening to audiobooks. I’ve never really been an audiobook person, but have become one out of sheer boredom. Unlike podcasts, audiobook readers have a nice cadence in their reading that helps lull me into a rhythm while I run, while occupying my mind. I prefer thrillers, since they keep my attention and often aren’t as literary as other books, so I don’t miss interacting with the physical text. I borrow audiobooks from the NYPL, using the Overdrive app, which I highly recommend.

I am following a version of Hal Hidgeon’s Novice marathon training plan. I consider myself a novice, in that this is my first marathon. However, even though he suggests you run 5 days a week, I find this excessive, and also I would need a hip replacement if I was logging that many miles. Instead, I’ve been doing 2 runs a week, usually a shorter one on Tuesdays and the long run on the weekends. In between, I do strength training and yoga (more below). This works for me to get enough miles in and build endurance, but I’m not interested in training for speed. Plus, running twice a week takes up enough time already. When I was half marathon training, I was only doing long runs once a week and it worked for me.

I will say that my endurance has improved leaps and bounds since adding in another run. As of now, my “short” run is up to 7 miles, and usually I fly through it. Not to toot my own horn, but I am in great shape now. It turns out training actually improves your abilities. Who knew?!

Along with pushing myself to my mental limits, I’m obviously pushing myself to physical limits, and it has become imperative that I actually take care of myself. One thing I was really lacking was the proper nutrition. Shocking, eating bananas and sunbutter for every meal do not a balanced diet make.

I tracked my intake for a few weeks, since I suspected I was not getting enough of the right nutrients. As it turned out, I was incredibly deficient in protein, even though I live on eggs. So I’ve since added in a shake every evening, and it had noticeably helped my recovery and general endurance. I’m generally pretty wary of protein shakes, but this one has been excellent. On a good day, I’ll blend with soy milk, a banana and — you guessed it — sunbutter.

I’ve learned that I need to eat almost immediately before and after a run. If I don’t eat before, I will be literally running on empty and will spend most of the run feeling weak and thinking about what I will eat when I finish. If I don’t refuel after, my muscles get crampy and my legs are extra restless when I try to go to sleep. I also carry fruit snacks with me while I run, because after about 10 miles I start running out of steam.

On the flip side, I’ve also learned what foods do NOT agree with my running. Aside from the obvious (beer, dairy, high fiber foods) I also learned the hard way that anything my body is naturally sensitive to in general, it is extra sensitive after a run. Never again will I consume chicken wings immediately after running. 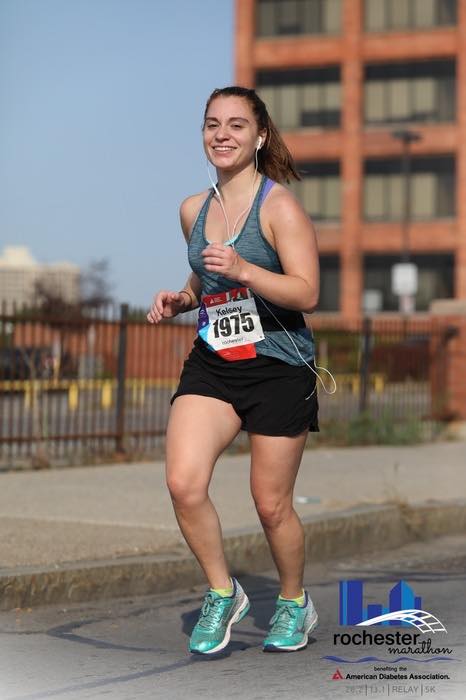 Yoga has re-entered my life and is very important. I always try to tell myself that I can stretch just fine by myself, but weekly yoga classes keep me feeling aligned and loose. If I don’t go, my hamstrings and shins get very tight, and the first 5k of my run will be slow, painful, and full of futile attempts to stretch them out every quarter mile.

Hydrating myself has become a whole thing as well. My clothes are so soaked with sweat after runs that they are heavy. I lose about 2lbs of sweat on these runs, so it has become imperative that I am always full of water and Gatorade. My pee is almost always clear. Yum.

One thing I’m still fighting with as I continue to train is (gross) blisters. Something about the way I stride makes blood blisters take up residence under my toenails. It is both painful and disgusting. So far, I’ve learned to drain the blisters, but not remove any skin, and they’ve started developing into callouses. My mom would be mortified if she saw my toes, because I’ve not got a pedicure in some time, in favor of developing these callouses.

Overall, I’m thrilled with my training so far. Partly because I’m shocked I’m still on track, and partly because I’ve not hit some of the hardest milestones yet. As August comes to a close, I will inch up to 16, then 18 miles, with the Big Daddy 20 miler coming in September.

Any tips or tricks for marathoning? I cannot wait for the Deep Dish pizza I’m going to inhale on October 7.

How I Got into the Publishing Industry